“Take life lightly, that lightness is not superficiality, but gliding on things from above, not having boulders on the heart”.

Lightness is freedom from the burden of disease. It is the possibility to have a normal life back.
Paolo Ruffini is the testimonial for a multichannel campaign that aims to make awareness on Primary immunodeficiencies, that affect six million people in the world.

On the occasion of the World Primary Immunodeficiency Week (WPIW) we created, together with AIP Onlus, #LeggeriSiDiventa, the awareness campaign aimed at informing public opinion and patients about the importance of early diagnosis to improve patients’ quality of life.

A message that flies high

#LeggeriSiDiventa has been conveyed through an integrated strategy of online and off-line actions, supported by unconventional tools coherent with the “lightness” theme.

The social accounts of AIP Onlus, the testimonial Paolo Ruffini and Libreriamo (online magazine dedicated to books and culture) were used to communicate the main contents of the campaign and to invite users to become an active part of the process of sensitization: they shared, through a dedicated hashtag, citations on the theme of lightness taken from the world of literature, cinema and music. 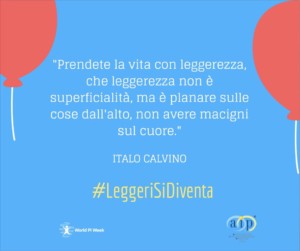 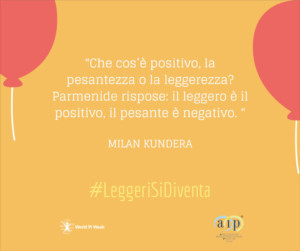 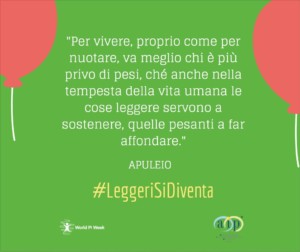 Thoughts moved on Twitter thanks to ScrittureBrevi, a community that has lent its “lightness” hashtag to the World Immunodeficiency Week.

Thanks to the active participation of web users, it has been possible to give greater visibility to the awareness message.

Moreover, Italian TVs broadcasted the video realized for AIP Onlus that opens with a quote by Italo Calvino recited by Paolo Ruffini.

In an imaginary setting, the actor’s words are accompanied by small visual tricks aimed at emphasizing a positive message: information can facilitate the diagnosis and definition of a therapeutic pathway that gives lightness back to patients daily life.

The campaign moved off-line, precisely in Piazza Duca d’Aosta in Milan, where 300 branded balloons colored the sky of the Lombard capital.

“Lightness” and not “superficiality”

Already protagonist of the previous campaign for WPIW (#CiakSiViveBene, that means #ciaklivingwell) Paolo Ruffini, an actor and irreverent showman, has renewed his interest in health issues by lending his face to the new spot.

#LeggeriSiDiventa among the trending topics

Thanks to the social networks, we have achieved remarkable results ,with strong and spontaneous participation of public opinion.

#LeggeriSiDiventa among the trending topics

Thanks to the social networks, we have achieved remarkable results ,with strong and spontaneous participation of public opinion.